Vitamin SEA serves as the best de-stressing of all time. If you can’t get enough of the sea, maybe it is time to incorporate it into your home. Do not fret, sea-inspired decors are really easy to pull off and create a very uplifting mood. It is also very easy to DIY. The mix of colors like blue, light gray, and white produce a very calming and casual ambiance in your home. 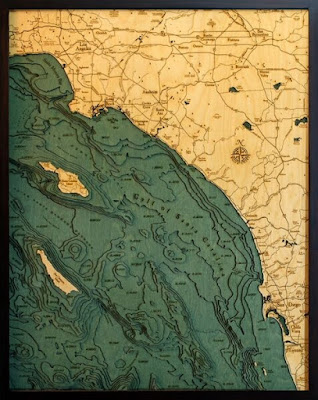 We love travelling. We love collecting memories. What better way to remember your boating trips or visits to the shore than with a custom laser cut topographical map? Not into Maps? Try a Wood Topographical Coffee table, or custom clock. 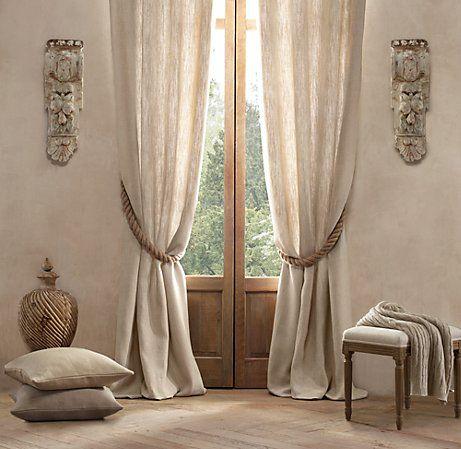 Sunlight and creates a very radiant backdrop for your other home décor. The trick is to elegantly drape the window and not conceal it with heavy curtains. Using a natural wood to hang the curtain will give out a very dramatic effect. 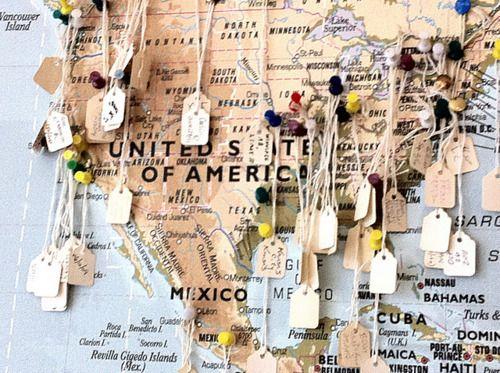 Make use of the nook in a corner of your house. Put in a themed designed board or a wood crafted map to instantly create a sea bound atmosphere. It will be more fun if you put on a map, using pushpins mark the places you’ve been. You can also make flat pins using shells or other mementos from your trip. If however, you have not been on a vacation for some time, use the board to mark where you want to go. The board will also bring inspiration to plan those perfect vacations.

Make use of those shell collections. Instead of storing them somewhere in the house try arranging them in artfully and add some candles. It will instantly give you the ocean feeling. 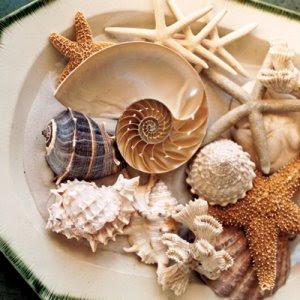 Ocean in a vase 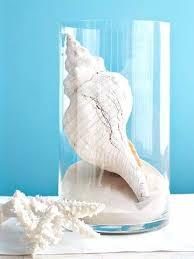 If arranging is not your talent you can opt for a more minimalist theme. Put a well-rounded conch in a glass container and pour sand into it. You can let the vase be the center of the attention or rest some starfish or another shell into the vase to complete sea inspired décor.

Bring out the natural beauty of the wood by arranging them into sea creatures, boat or anchor. Recycle wood into an artistic masterpiece creates a bold statement in your home. 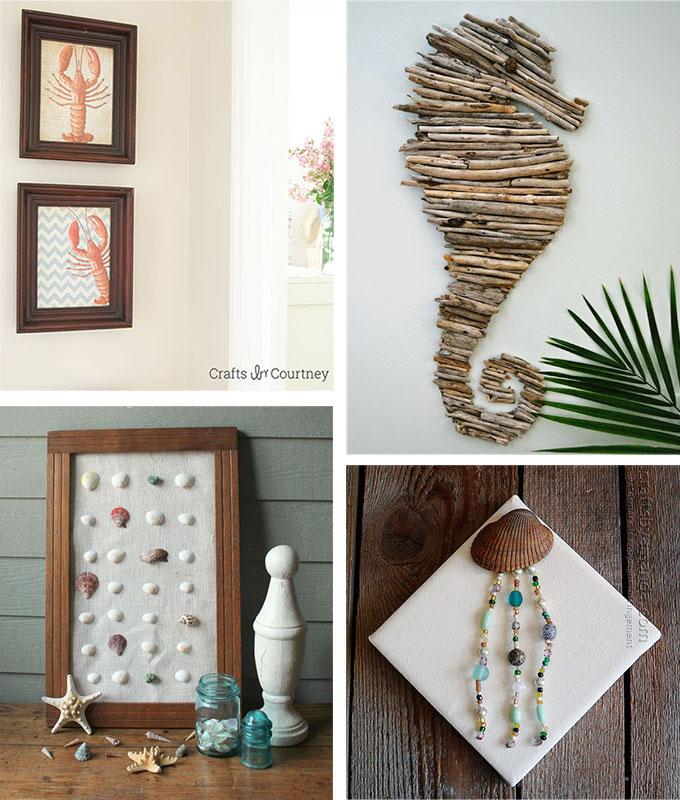 Make a drape made of shells
Punch small holes in shells and use a wooden string to tie them together to create an interesting array of sea shells. You can put them over a mirror or use them to bind to tie your curtains. These shells can also make your shower curtains a lot more fun. 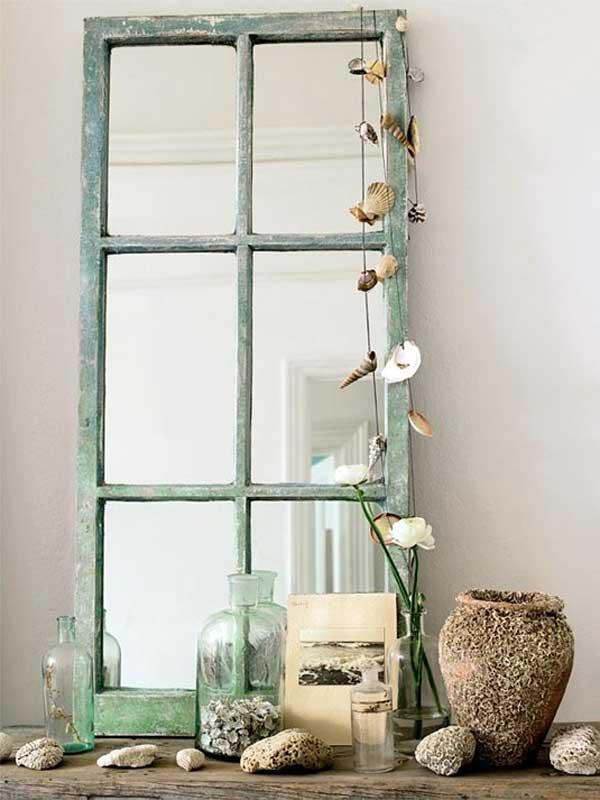 These nautical coasters made with white ropes gives out the feeling of being on a yacht out in the open seas. 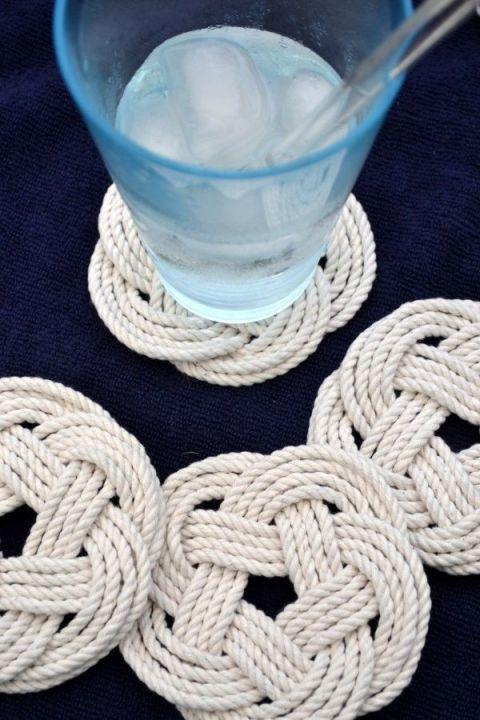 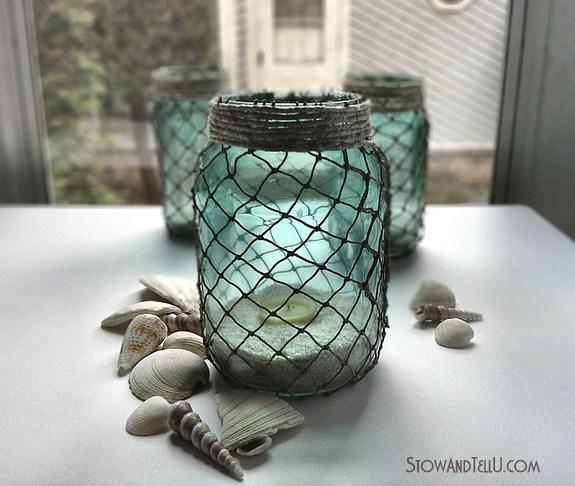 Make an interesting centerpiece with these netted mason jars. Choose a jar that already has a hint of blue color fill it with sand and candles to make it more spectacular. You can either put it in the entrance hallway or hang it on by the porch.

Shells by the door 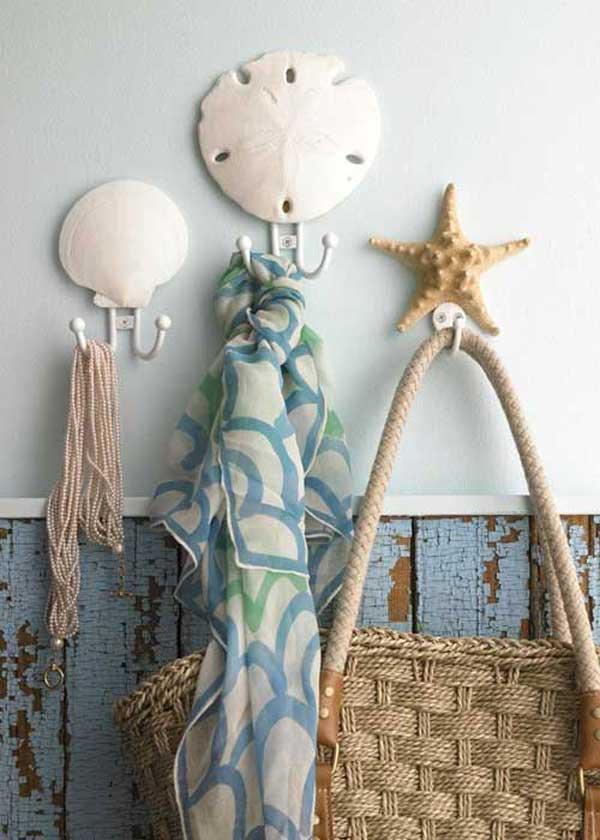 Transform an ordinary doorway into an attractive corner. Glue in shells and starfish on top of the hangers to set the sea inspired theme in your house.

How Lakes Were Formed [Great Lakes] 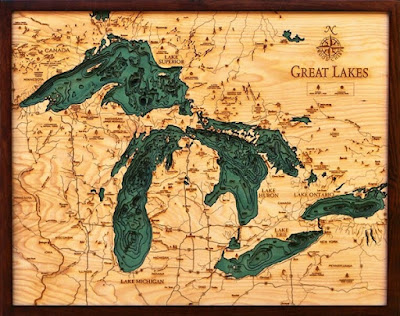 Lakes are bodies of water contained in a basin and surrounded by land. Millions of lakes are scattered all over the world. Lakes are formed in every kind of environment known to man; near the shoreline, plains, and mountains even in deserts.  The water found in lakes either comes from snow, melting ice, streams, rain and groundwater outflow. Also, lakes contain mostly freshwater. Moreover, lakes vary in sizes; some are just a few square meters others which are called ponds.

Others are big enough to be called seas. Movement in the Earth’s tectonic plates, glaciers, and volcanic activity create lakes. As well as the wind and river currents help to form lakes. Most of the lakes fill a low-lying area in the earth’s surface referred to as basins. Tectonic Lakes The movement in the Earth’s surface possibly in higher ground or mountain, hills or plateau creates depression along the rupture course.

When the surface cracks or breaks faults may form. In time water filled these faults from rainfall or another source of water leakage which forms lakes. Glacial Lakes Estimated about 20,000 years ago, glaciers started peaking in the Earth’s surface; subsequently, it began to slowly melt.  Water from the glacier sheets retreating filled the low-lying areas within the Earth’s surface. Around 18,000 years ago melting glaciers formed numerous lakes in the Northern Hemisphere.

Volcanoes often form lakes. When a volcano becomes inactive, water or melted snow may fill the crater. This happens when precipitation occurs more quickly than evaporation. Occasionally the peak of the volcano may collapse or blown off leaving a hollow referred to as caldera. Rainwater may also fill the caldera and eventually became a lake.

Rivers also form lakes as they flow back and forth expansively across the plains which called meanders. As the river expands, it may create another way to circumvent a river leaving a body of still water, which also forms lakes.

Salt lakes or saline lakes were formed when water containing minerals and salt cannot leave because there is no natural outlet in the lake. The water with high level of salinity evaporates leaving the minerals behind.

When glacial ice blocks a river or a body of water it forms a lake. In the past, glacial ice dams created a massive surge of floods. Similarly, landslides can also form lakes since there will be a huge buildup of water behind the massive rocks. Man-made Lake or Reservoir Humans can also replicate nature. Man-made lake or reservoir usually serves the purpose of storing and collecting water.

It is used for irrigation or for community water supply to protect them from drought or floods. Usually, engineers construct a dam across a flowing river to create a lake. Other lakes Few other lakes originated from sinkhole activity. A collapse in the outer layer of the earth can cause a depression or a hole in the ground. There are instances that these sinkholes are connected to a water leakage which fills them completely. Carved Lake Art
Posted by Stephen Twomey at 8:42 AM