Chesapeake Bay History & the Meteor That Formed the Groundwater

Close to multiple metropolitan centers and abutting the nation’s capital, Chesapeake Bay operates today as a major tourist attraction, but its past includes a varied and often colorful series of events. As the biggest estuary in the United States, it offers visitors 11,684 miles of winding coastline to explore. Travelers experience everything from boating to catching the famous blue crabs of the bay. 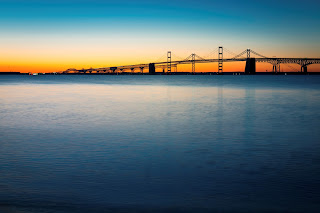 Chesapeake Bay has its origins in the warm environment of the late Eocene epoch. Around 35 million years ago, a bolidea meteor radiating twice the light of a full moonslammed into the ground between what is now Virginia and Delaware. The resulting Chesapeake Bay meteor crater measured 53 miles in diameter and eight-tenths of a mile in depth. With a newly formed basin, surrounding rivers diverted their courses and created a single channel that dug an impressive river valley over the subsequent millennia. The currently recognizable Chesapeake Bay formation has only been around for about 12,000 years, created when sea levels rose from melting glaciers and submerged the river valley. Surprisingly, the meteor’s havoc continues to this day. Bedrock fractured by the impact often allows deeper saltwater to seep into freshwater aquifers. These same fractures also cause surrounding land to slowly slide down into the ancient crater. Additionally, in 2013 while scientists were studying the impact crater, they discovered “the oldest large body of ancient seawater in the world,” early Cretaceous seawater, resting about a half-mile underground near the bay. It is estimated that the water is between 100 million and 150 million years old.

The first European to sight Chesapeake Bay was famed adventurer Giovanni da Verrazzano in 1524. Over the next few decades, Spanish sailors and missionaries made journeys into the Bay region. Permanent settlement by English colonists occurred after Captain John Smith’s mapping expeditions in 1607. Smith’s maps detailed the serrated coastline of the Bay created by the numerous tributary rivers, and this jagged outline is still beautiful to behold when carved into a Chesapeake Bay Wood Chart. Cavaliers fleeing Cromwell’s reign of terror were the first sizable population to settle the region. Among others, they helped establish the important tobacco plantations ringing the area. While the Bay experienced its share of turmoil during the Revolutionary War, the War of 1812 brought considerable strife when British forces raided coastal communities and burned neighboring Washington, D.C. Fishing grew in importance during the 19th century, but overfishing and agricultural pollutants hit oyster harvesting especially hard later on. With greater affluence throughout the world, tourism has grown to take advantage of the mild climate and waters with remarkably low salinity due to the adjacent rivers.
Posted by Unknown at 9:39 AM