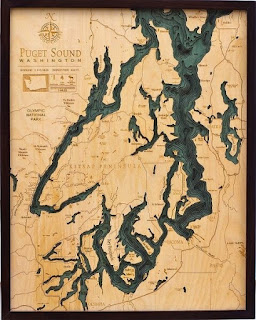 As beautiful as it is ecologically complex, Puget Sound is a favorite destination of boaters, travelers, explorers and romantics. Whether they've seen the area from aboard a ferry or atop a kayak, many ocean enthusiasts wish they could bring just a bit of this special place home. It might seem impossible to contain the majesty of the Puget Sound in a small frame, but that's exactly what this 3D nautical wood chart does. Featuring stunning detail and sleek styling, this laser-etched representation of the area is a must-have for anyone who's fallen in love with Puget Sound.

A Nautical Chart Unlike Any Other
Anyone who spends much time navigating on water knows that the accuracy of a nautical chart is of the utmost importance. There's no exception when it comes to our 3D nautical wood chart of Puget Sound. An array of nautical and topographic features is highlighted on the chart, which is crafted via laser etching to show water depth and estuary features. Cities, national parks and points of interest are detailed as well.

If you're looking for gifts for boaters or for nautical-themed gift ideas for someone who's fallen in love with Puget Sound, there's no better choice than this chart. It's a gorgeous representation of one of the most beloved estuaries in the United States, and it makes a striking impression in any space. Pacific Northwest enthusiasts will love receiving a gift that has the same natural, earthy vibe as the area they love.

Topographic Art on Display
Of course, our bathymetric chart of the Puget Sound is more than just geographically accurate. It's also a versatile piece of art that can be used in settings ranging from offices to universities to homes. Crafted from Baltic birch and highlighted in a gorgeous aqua wash, it's a nautical chart that's also a standout piece of contemporary art.
Posted by Unknown at 8:05 AM